The Chinese Valentine's Day is celebrated on the 7th day of the 7th lunar month in the Chinese calendar. There is an interesting love story behind this day about the 7th daughter of Emperor of Heaven and an orphaned cowherd. The Emperor played spoilsport and separated both of them. The 7th daughter was forced to move to the star called Vega and the cowherd moved to the star named Altair. They are allowed to meet only once a year on the 7th day of 7th lunar month. 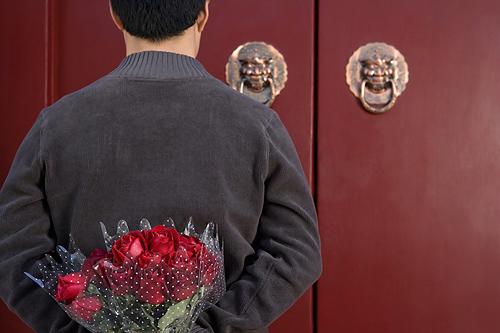 The Festival
On the Chinese Valentine's Day, lovers go to the temple of Matchmaker and pray for their love and happiness and their possible marriage in China. People who are still single also do the same thing to ask their luck of love in the Matchmaker temple.

The Chinese Valentine's Day is also called The Daughter's Festival. Since ancient times, Chinese girls always want to learn a good handcrafting skill like the Weaving Maid. The knowledge of handicrafts and skill development is essential for their future family. On that night, the unmarried girls pray to the Weaving Maid star to let them become smarter.

When the star Vega is high up in the sky, girls perform a test by putting a needle on the water surface. If the needle doesn't sink, it's a sign of girl's maturity and smartness and she is ready and eligible to find a husband. Girls may, now, ask for any wish of their choice, but only one every year.

People, in some provinces of China believe that decorating the ox's horn by flowers on the Chinese Valentine's Day will save them from catastrophe. Another fascinating aspect of Chinese Valentine's Day is women washing their hair to make it look fresh and shining whereas Children in turn wash their faces the next morning using the overnight water to get a more natural and beautiful look.

Backdrop Of The Chinese Valentines Day
There is an interesting story behind the Chinese Valentines Day, which began from a handsome poor orphaned boy, who lived with his elder brother and sister-in-law after the death of his parents. The boy owned an old ox with which he worked on the field everyday. His daily life was just like in a Cinderella story. The ox was in fact an immortal from the Paradise. For his mistakes in the Heaven, he was punished and sent on the Earth as an ox.

The ox developed a liking for the boy and one day asked the cowherd, "You are a nice person. If you want to get married, go to the river and your wish will come true." The cowherd went to the stream and saw all the seven pretty daughters of Emperor who had come down from Heaven to take a bath. Captivated by the beauty and charm of the youngest daughter, the cowherd took away her fairy clothes secretly. The youngest couldn't fly back to Heaven, along with her sisters, without her fairy clothes. Then the cowherd appeared and asked her that he would return her clothes if she promised to marry him. The girl felt shy but in eagerness, agreed to the boy's proposal. Thus, they got married and had two children.

One day, finding his last days near, the old ox told the cowherd that he should keep his hide for urgent situation after his death.

On the other hand the Emperor didn't find the sky that beautiful as before without his seventh daughter weaving clouds and rainbows. He sent his daughter's grandmother to find the missing daughter and to bring her back. The grand mother took the seventh princess along. While the 7th princess was flying back to the Heaven with her grandmother, the cowboy wore the ox hide, took his children in two bamboo baskets with his wife's old fairy clothes and chased his wife in the sky, To keep them separated for ever, the grandmother made a milky way in the sky with her hairpin. The seventh princess (cowherd's wife) was moved to the star Vega in the Lyra (Harp) constellation. And the cowherd with his two children stayed in the star Altair (Flying one) in the Aquila (Eagle) constellation. The star Vega is also known by the name of the Weaving Maid Star whereas the star Altair as the Cowherd Star in China.

Send flowers and gifts to China on Valentines Day or on Chinese Valentines day? View below: