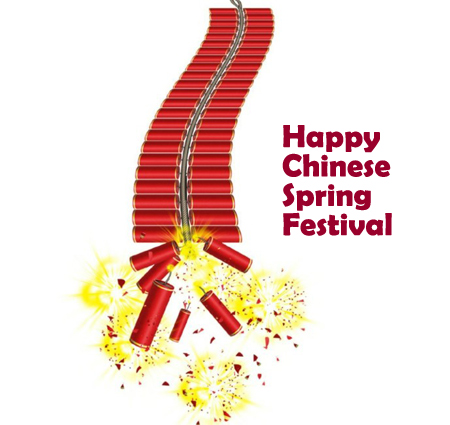 Spring festival generally refers to the New Year’s Eve and the first day of the Chinese lunar calendar. But in the civil society, Spring festival is traditionally refers from the eighth day of the twelfth lunar month or the 23th/24th of the twelfth lunar month which is Kitchen God Worshipping day, to the 15th day of the first month of lunar year, among which, the first day of the lunar year and the Lantern Festival day are the peak. During the Spring Festival, the Han nationality and many other ethnic minorities will hold many activities to celebrate this festival. These activities include sacrificing God and Buddha, holding a memorial ceremony for ancestors, blowing away the cobwebs, welcoming the happiness and good fortune, and praying for a bumper harvest year. These activities are rich and colorful, having rich national features. The New Year’s Day is regarded as the most auspicious day. The ways in which how to celebrate this festival are formed into a fixed custom through thousands years of developing. Some celebrating ways are even passed on till today.

Sweeping Dust
“Do the spring cleaning on the 24th day”. According to Mister Lv’s Spring and Autumn Annals, the custom of spring cleaning can be traced back to the Yao and Shun times. On the basis of a folk saying, the Chinese Character “尘”(dust ) is a homophony of “陈”(staleness); Therefore, the spring festival contains the meaning of “cleaning away the dirt and the old of the past year and usher in the new”, the purpose of which is to sweep away all the bad luck and whammy. This custom trusts pray for eradicating the old and fostering the new from people. When Spring Festival comes, every family would sweep their houses, clean varied of table wares, wash bedclothes and curtains, sweep courtyard, blow away the cobwebs and unblock the drains. The happiness atmosphere of doing cleaning and welcoming the Spring Festival is everywhere.

Pasting Spring Couplets
Spring Festival couplets, which is also called antithetical couplet written on doors, the spring post, scrolls, antithetical phrases and peach wood charms against evil, are used to describe the times of our life and express our best wishes with its neat, orderly, simple and delicate characters. It’s a unique literary form of our country. When Spring Festival comes, every family, no matter in the city or country, would select a pair of red couplets to paste on the door, in order to increase the joyous atmosphere. This custom arose from Song Dynasty, prevailed in Ming Dynasty. In Qing Dynasty, the ideological level and artistry of spring festival couplets are improved greatly. Liang Zhangju's Notes on Ying Lian discusses the origins and features of various works of these couplets.

Pasting Paper-cuts and Put the Chinese character “福” (good fortune) Upside Down
In the civil society, people also like to paste varied of paper-cuts on the windows. The paper-cuts can not only add the joyous atmosphere of festival, but also are combined with functions of decorating, appreciation and practicability. Paper-cut, which is a wide-spread folk art in my country, is very popular for thousands of years. Because they are usually pasted on windows, they are also called “paper-cuts on windows”. Using their unique summarizing and exaggerate way, paper-cuts on windows express the auspicious feeling and best wishes incisively and vividly, decorating the festival with red and flourishing meaning.

Except pasting couplets, the same time, some families will paste the Chinese character “福” on the doors, walls and linters. It is an age-old custom in our country. “福” means good fortune and lucky strike, attaching people’s yearn for happy life and expressing the good wishes for the better future. For the sake of express the yearn and wishes fully, some people just put the “福” upside down, meaning that happiness has reached and good fortune has reached(In Chinese, the word of upside down is 倒, which is the homophony of 到, meaning arriving in Chinese). In the civil society, 福 is also turn into different patterns, such as the god of longevity, the birthday preaches, Carp jums over the dragon gate, the harvests of the five grains, and prosperity brought by the dragon and the phoenix.

“One night connects two years of age. The five watches of the night divide two days”. On the New Year’s eve, the whole family get together, eat family reunion dinner, light candles or oil lamps, chat around the furnace, wait the moment of ringing out the old year and stay up all the night, symbols driving away all the illness and welcome the good luck of new year. This custom prevailed gradually. In the early Tang Dynasty, The Emperor Taizong of Tang, Li Shimin wrote a poem of staying up on the New Year’s Eve, “Walking out of the snow in the winter an step into the warm spring breeze.” Until today, people still get used to staying up on the New Year’s Eve to welcome the arrival of the New Year.

In the ancient time, staying up on the New Year’s Eve has two meanings: for the elders, staying up means farewell to the old days, which means time need to be cherished. For the young people, staying up is to lengthen the life of their parents. From the Han Dynasty, The transition moment of old year and new year is generally at the midnight.

Firecracker
In the civil society of China, there is a saying called “setting off firecrackers when opening the door”. It means that when the New Year comes, after opening the door, the first thing to do is to set off firecrackers, using the cracking sound to welcome the New Year. Firecracker is the special product of China, which is also called “cracker” and “banger”. It origins very early, having a history of more than two thousand years. Setting off firecrackers can produce a jubilant atmosphere, which is a recreational activity during the festival. It can bring happiness and lucky to people. As time goes on, the application of firecrackers became wider and the types of it became more. On occasions of important festivals, ceremonies, marriage, house was built, opening ceremony; firecrackers are all set off to celebrate for good luck. Now, Hunan Liuang, Guang Dong Foshan and Dong yao, Jiangxi Yichun and Pingxiang, Zhejiang Wenzhou are all the famous birthplaces of firecrackers. The firecrackers produced there are of high quality. They are not only sell well in the whole country, but also all over the world.

Pay a New Year Call
On the first day of the Chinese lunar calendar, people would get up early, wear beautiful clothes, dressed up, visit relatives and friends and wish each other a happy new year and good luck. The ways of paying the call were manifold. Sometimes, it was the clan elder who lead a number of people to visit families from door to door; sometimes, it was several colleagues visit one family together; sometimes, a number of people would get together and congratulate each other, which is called “mass congratulations”. Because call at other’s house will cost time and energy, some elites and scholar officials will use cards to congratulate, which developed into the “New Year Card”.

When making the ceremonial call, the younger generation should first kowtow to the elders, wishing them to have a long life and good health. And then, the elders can give the 压岁钱(gift money) that they’ve already prepared to the younger generation. It is said that gift money can suppress 邪祟(evil thing), because “岁”(year) is the homophony of “祟”, those who received the gift money can spend one year safely. There are two kinds of gift money. One, which is dragon-shaped and weaved by colorful strands, should be put at the foot of the bed. It is recorded in Yanjing Age in Mind; another one is very common, namely, the one that wrapped with red paper. Gift money can be given in the presence of all when the younger generation is kowtowing or put under the pillows of children when they fall sleep. Currently, the custom that the elders give gift money to young children is still very popular.